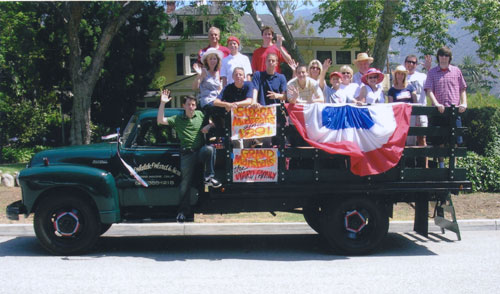 Part of E. Waldo Ward & Son's history is the tools and vehicles that have helped build our business from the beginning. It is great to look around and still see many historic items still in use. If anyone has been to our place and taken a tour, most likely you have seen our old Chevrolet truck. Edwin Waldo Ward, Jr. purchased the truck in 1952 for $2500 from Pasadena's Clay Chevrolet. It came complete with an optional stake bed and heavy duty springs. The first oil change cost around $6.50.

It has been well used over the past decades picking up supplies, fruits and vegetables and making deliveries to customers, it now sits proudly in our garage as if it was brand new. About 10 years ago, Richard Ward (third generation) and his son-in-law, Al Benko, carefully restored the truck to its original glory; completely stripping the truck down to the frame. At the time when we purchased the truck, the most common, standard color was a dark forest green. Sometime in the 1970s, it had been painted white. We repainted the original green color after much sanding and rust repair.

Recently it was featured in the Sierra Madre Fourth of July parade honoring the Ward family as the grand marshal. Richard Ward has also taken it to a couple of car shows in Pasadena and Sierra Madre. It represents not only E. Waldo Ward & Son's history but the history of the local community. We are the city's oldest existing business.

It now shines brightly as a part of E. Waldo Ward & Son's rich history. Come by for a visit...